With only 8,000 scholarships available each year for the highest achieving academics, along with the responsibility of representing the United States in a foreign country, not everyone is cut out for the prestigious Fulbright Program.

As she proved in so many ways during her time at Wilbraham & Monson Academy, Stephanie Reeves ’12 isn’t just anyone.

As one of the most competitive, merit-based grants in the country, the program advocates mutual understanding and international exchange under the U.S. State Department. So when Stephanie was one of the fortunate few to earn a Fulbright Scholarship, it was no surprise her WMA roots played a role in where she would go.

After her graduation from Connecticut College in 2016, Stephanie spent the year immersing herself in Russian culture at Kazan National Research Technological University in Tatarstan, Russia, where she taught classes.

“One hundred times over, I would do it again,” said Stephanie, who returned from her year abroad in June.

Having completed her fourth journey to Russia, Stephanie recalled the first time she visited the world’s largest country, when the Academy traveled to Moscow and St. Petersburg in 2011.

“I went to Russia with Dr. (Kathleen) Gorski and Mrs. (Donna) Barone,” said Stephanie, who went on the trip as a member of the school’s Global Scholars. “When I went to Russia I thought it was interesting and offbeat, so I owe my first exposure and interest to WMA.”

Despite taking Latin, Spanish and Chinese at WMA, she selected Russian as her language of study at Connecticut College. She loved it so much, not only did she study the language all four years, but she also majored in Slavic Studies and went to Russia two more times — living with a Russian family and taking classes in St. Petersburg during a study abroad semester in 2014, and interning in Moscow at a neuroscience laboratory for the summer of 2015.

During the first semester of her senior year in college, Stephanie decided to apply to the Fulbright Program. Seeking a chance to develop meaningful relationships, share cultures and improve her language capabilities, she couldn’t deny that Russia was calling for more.

“I really thought I was going to apply to a neuroscience grad program out of college, but having gone to Russia so much, it kept pulling me back,” she admitted. Stephanie was accepted in April 2016, when she was granted a teaching position at a university in Kazan, the country’s eighth largest city.

“It was a great fit,” beamed Stephanie, who also had two papers published in Russian journals during her time there. “I taught every day and I taught a range of classes. In some, I was there as a guest, and in others I was the head teacher.”

With a room full of Russian college students as her audience, one of her favorite classes was U.S. Studies, where the group talked about everything regarding the United States.

“We talked about art, pop culture, history and all different sorts of things,” she said. “That was a pretty cool class. I also had conversation classes, inspired by the idea that speaking is the best way to learn the language. We also practiced essay writing and critical reading skills in preparing for the TOEFL (a standardized test of English as a foreign language).”

Where she made an even greater impact was outside the classroom, hosting an English Club once a week. There, no boundaries existed and the exchanges were at a more casual level than teacher-student.

“We got to be really close and they became my friends,” she said. “We talked about politics, religion, race — all the things people shy away from were things we dove right into. It was also, I felt, a really important time to be in Russia as an American, given the current political situation and strained relationship between the two countries. In times of tension, it means a lot to see a real face or make a meaningful connection.”

And Stephanie, who began attending the Academy in seventh grade, connected her love and interest of Russia to her time at WMA.

“I owe so much to WMA, and specifically to Global Scholars, for my whole life path,” said Stephanie, who works as a research assistant at a vision laboratory in Boston. “I never would have been so interested in international exchange or in languages if it hadn’t been for WMA. Everything started for me here and I’m very grateful.”

While Jessica “Jessie” Smith ’14 and Junhao “Mark” Xu ’16 had much in common as students at WMA - a love of learning, strong work ethic, spirit of adventure and desire to see the world - their backgrounds, academic passions and career aspirations could not have been more different. Their college searches were equally unique. 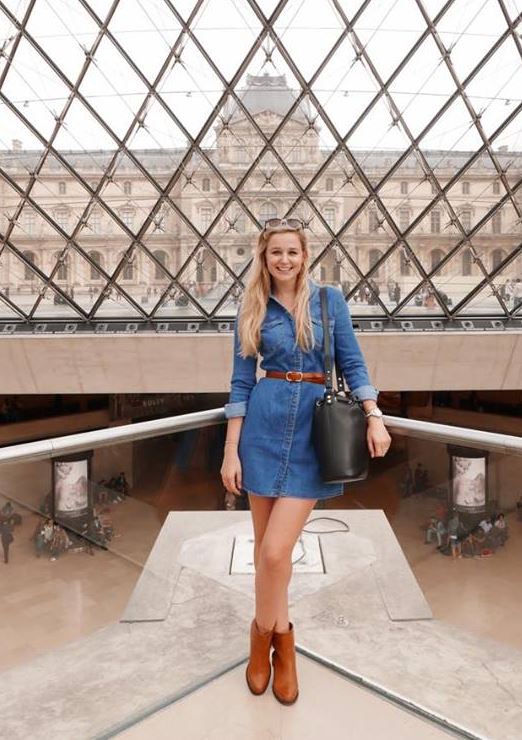 While Jessie had been focused on attending New York University since childhood and applied for admission under NYU’s second round of Early Decision, Mark cast a much wider net that ultimately resulted in his acceptance to 15 highly-competitive schools that included Boston College, UCLA, University of St. Andrews in Scotland (alma mater of Prince William) and Washington University in St. Louis. Another noteworthy accomplishment for Mark was making it to the final round, Skype interview to read economics and management at Oxford University, widely considered to be the most selective program within the most competitive universities in the United Kingdom.

Jessie’s quest to attend NYU was fueled by the unique opportunities for interdisciplinary study that a large urban university could offer. Her academic interest in communications led her to NYU’s Global Liberal Studies program, a decision that has allowed her to concentrate in Contemporary Culture and Creative Production and take advantage of courses within NYU’s Stern School of Business, Tisch School of the Arts and Steinhardt’s Media, Culture and Communications program. Her original plan was to also pursue a double major in French in the College of Arts and Science, but instead switched to a French minor in order to begin graduate work in the Institute of French Studies at the Graduate School of Arts and Sciences during her undergraduate years.

Mark’s interest in NYU, and the campus in Abu Dhabi specifically, was much more serendipitous. During dinner with a close friend from his hometown of Weifang, China, who was studying at Harvard, Mark first learned that NYU Abu Dhabi had been her first choice, but her parents had discouraged her from attending once Harvard’s offer came through. Her enthusiastic recommendation led Mark to research NYUAD more closely, and what he found both surprised and excited him. Based upon the excellent faculty, the strong programs in economics, mathematics and political science,

the tight-knit community and the generous financial aid, NYUAD soon became Mark’s first choice. He also received encouragement to pursue this intriguing option from his college counselor Maureen Kelly Chesky and Director of College Counseling John Boozang, who had recently returned from a whirlwind visit to the Abu Dhabi campus at the invitation of NYU’s admission director. When he attended the Candidate Weekend at NYUAD, a unique part of the admission process when students from all over the world are invited (for free!) to campus to meet with professors, administrators and students, Mark experienced firsthand what made this college community so special and made his decision to enroll very clear.

Jessie and Mark have already distinguished themselves academically while taking full advantage of every opportunity to expand their horizons and make meaningful contributions to the NYU community. A Dean’s List student for the past two years, Jessie is also the recipient of the prestigious Gilman International Scholarship, which has made it possible for her to spend this year studying in Paris. She was also selected as the only undergraduate resident assistant at NYU in Paris where she serves as “in loco parentis” to the predominantly freshmen students adjusting to living and studying abroad. When she is home on the NYC campus, Jessie is an NYU Admission Ambassador, a coveted paid position where her natural poise and enthusiasm make her a highly effective recruiter for the NYU admission effort.

Although Mark is just midway through his freshman year at the time of this writing, he too has “made his mark” on the university. He currently serves as President of the Abu Dhabi chapter of the Stern Political Economy Exchange Club (SPEX-AD), and is working closely with the economics department chair conducting research on labor unions. Like Jessie, he has made it a priority to “see the world,” and spent the month of January in Florence, Italy. He took a course on Galileo, which incorporated the fields of astronomy, history, philosophy and physics, subjects Mark knew little about before going to Italy. He described it as an “amazing experience,” and is so grateful to be able to access these incredible programs that have enriched his college education already.

While their paths to NYU were uniquely their own, Jessie and Mark are proud to represent WMA’s Global School® and credit the excellent foundation that they received here as a significant factor in their college success. Mark gave a special “shout-out” to Mr. Kindblom when he became the only freshman to pass the economics placement test at NYUAD, especially in light of the fact that the school does not accept any advanced standing credits. Mark would have been able to submit scores from 11 Advanced Placement exams, and had achieved top scores of “5” on two different economics exams. Jessie believes that her “intrigue and passion to study abroad began with WMA,” as well as helping to build the confidence she has relied upon to succeed in all of her endeavors. Jessie and Mark represent WMA at its best, and we are excited to see their futures unfold.