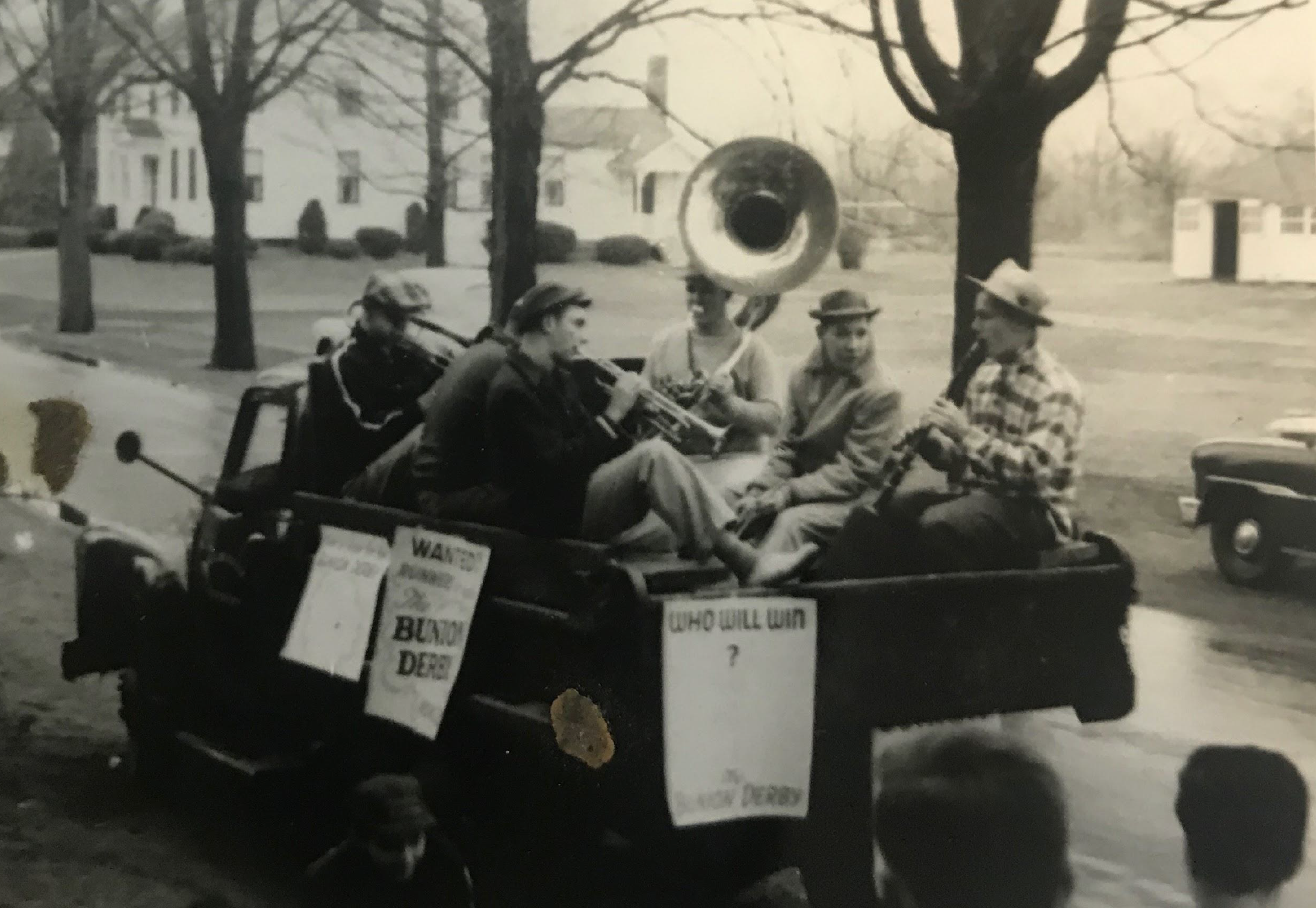 By Janet Moran, Director of Archives

In 2019, we celebrated the 75th anniversary of the first running of the Bunion Derby. Many have chronicled this great tradition since its inception at Wilbraham Academy in 1944. This article celebrates the historic race from the beginning of its history and contains excerpts from the 25th and 50th anniversary articles printed in the Wilbraham Journal and the Academy Magazine.

Derby co-founder Roger Nye Lincoln (Faculty, 1938-1972) published the 25th anniversary article, detailing his fond memories of the race’s inception. Coralie Gray, a librarian, history teacher and archivist for more than 40 years, organized the Derby for many years and documented the Bunion Derby on its 50th.

Mr. Lincoln and Ms. Gray live on in our memories fondly today. Without them and Derby co-founder Philip H. Shaw, (Faculty, 1934-1969)  and current Assistant Director of Athletics and Athletic Trainer Erika Whipple, the race would not be what it is today.

The Bunion Derby began as a competition between the soccer and football teams (and as a proud parent of two former WMA soccer players, I’m pleased to say that rumor has it that the soccer team usually won). After the merger between Wilbraham and Monson academies, Head of School Dick Malley opened the race up to all students. During Mr. Malley’s first year as  Head of School, he ran the Derby in a nightcap and pajamas.

Teachers (Mr. Mazieka!) have even been known to give extra points on tests to students who ran the Derby. People have also been known to walk or ride on horseback, skateboard and bicycle around the 1.8-mile triangle of Main, Springfield and Faculty streets.

Prizes were first given approximately 25 years ago, with offerings of pizza parties, T-shirts and assorted other goodies. Today, prizes are awarded for a variety of themes: fastest team, fastest department, best costume and funniest costume. Finishing before Faculty Marshal Don Kelly erases an unexcused absence for students.

The winner of the Derby also has their name engraved on a trophy.

Steve Gray ’70W, a faculty member from  1986-2018 and longtime photographer of the Derby, shared an interesting story about those trophies. In 1986, Mr. Gray was speaking with Bob Peck (Faculty, 1984-1988) in an area behind the balcony above Greenhalgh Gymnasium, which had served as the athletic reception and board room prior to the merger.

The room had a long table surrounded by trophy cases that displayed Wilbraham Academy’s athletic trophies, including all of the Bunion Derby trophies. Mr. Gray remembered the trophy cases, which had been hidden away, covered with plywood. Steve mentioned it to Mr. Peck and they both had the same idea. They quickly removed the plywood. Behold, all of the Academy’s trophies, including the ones containing the names of the Bunion Derby winners from 1944 to 1970, were there. They had been hidden for 14 years. What a find!

Ms. Whipple took over organizing the Bunion Derby in 1997, and her enthusiasm and spirit have continued to make it one of the highlight events of the Academy every year.

“The Bunion Derby has always been a great way to end our fall season,’’ Ms. Whipple said.

“The competition has grown from being the soccer team versus the football team to an all-school event. We have faculty, faculty children, pets all the way up to our elite athletes. This event brings the school together to either cheer on friends and colleagues or running/walking the course. The Bunion Derby was one of the first all-school functions that impressed me when I arrived. This is a tradition that I have helped keep alive and hope to continue the tradition until I leave the Academy. I always look forward to the Bunion Derby.”

How many schools have a race named after foot bunions?  Wilbraham & Monson Academy does. Long live the Derby!

•        Runs annually every fall at the end of the athletic season.

•        Offers competitions between teams, dorms and floors to add spice to the event.

•        Began with electing a mayor who would ride along in the head of school’s car or ride in a wagon with the school band playing all the way.

•        Still has a mayor, picked from the senior class, who reads the proclamation at the beginning of the race.