Xi’an and Beijing are both entitled that of the Four Old Capital Cities, with the other two Nanjing and Luoyang. They both have abundant historical sites and relics. 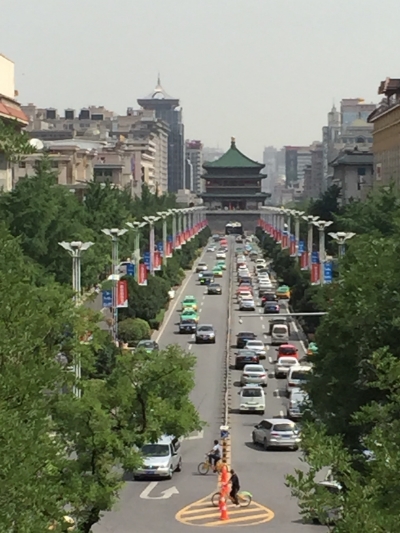 From my personal experiences in the past and especially this trip, I found that the two cities have a lot of similarities. Beijing (Peking) is an old city of 600 years, and in the past hundreds of years, it has been the capital city of China, with only breaks of short periods of time.

Beijing possesses a great amount of historical sites and relics from the last two dynasties, the Ming Dynasty and Qing Dynasty especially. Xi’an has an older history, with a longer time as the capital city of the country. There are magnificent resources of history in Xi’an, such as the Terracotta Army. People of both cities are proud of their history.

Beijing, as the capital, has a political significance in China, and in the world arena as well. This is especially true as China advances and plays a more and more active role in the world.

A lot of heritage and habits have been retained in various regions in China, represented by their respective regional cities. Beijing represents the culture in North China, and because of its status as the capital of the whole country, it often represents the Chinese culture as a whole. Xi’an, as a regional center of the northwest, often represents the culture of the northwestern region of China. Thanks to the obvious importance, both the central and city governments concentrate a great amount of resources toward Beijing’s building of infrastructure, resulting in Beijing being overall well-developed in China’s economy. Xi’an also enjoys special investment attention from the faculty hubbard grant

The Leverett Marsden Hubbard Sr. Family Teaching Faculty Sabbatical Travel Fund provides grants of $5,000 to faculty members who have taught at the Academy for five years. The grant’s purpose is to help faculty become more aware of the interdependent world in which we live and to develop an understanding of different countries, especially those from whom our nation has derived our culture and heritage. central government as its westward policy of economic development strategy. The fact that both Beijing and Xi’an hold many universities and colleges is also evidence of the central government’s special investment and attention.

The people of both cities are proud of the respective traditions and keep some of their traditional, or even “primitive,” ways of life.

In spite of the similarities, I found that people in Xi’an keep more of their traditional way of life than in Beijing. This may be because Beijing has more migrants from other regions than Xi’an, which brought in more cultural changes and diversity.

Another interesting finding I have is that although Xi’an maintains more of its cultural heritage, old buildings in Beijing are more common than in Xi’an, although they may have been fixed or even renovated. In Xi’an, in addition to many authentic sites, such as the Terracotta warriors, and original tomb constructions of political and cultural stars in history, many “historical” buildings are newly built, or rebuilt based on text records. These are “fake” buildings. One explanation for this is Xi’an has an older history, and many historical constructions were destroyed in wars and natural disasters, and therefore have disappeared. This is a preliminary study. I hope students will find this study interesting and will conduct more research to study deeper in the same direction, or in similar topics, such as a comparative study of different folk arts or cuisines in the two cities, or they can initiate a study from other cities or regions.

The Leverett Marsden Hubbard Family Teaching Faculty Sabbatical Travel Fund, named for former Wilbraham & Monson Academy Trustee Leverett Marsden Hubbard, was established in 2001 by his son Leverett Hubbard. The purpose of the fund is to help reward and retain full-time upper school teachers at the Academy. The fund provides travel grants of up to $5,000 to full-time teaching faculty members who have completed five years of classroom teaching and who will return as a classroom teacher the following year. The fund is intended to help faculty become more aware of the interdependent world in which we live and to develop an understanding of different countries, especially those of our international students.

Travel must be mission-based (tied to culture and education) and take place outside of the United States. The grant’s purpose is to help faculty become more aware of the interdependent world in which we live and to develop an understanding of different countries, especially those from whom our nation has derived our culture and heritage.