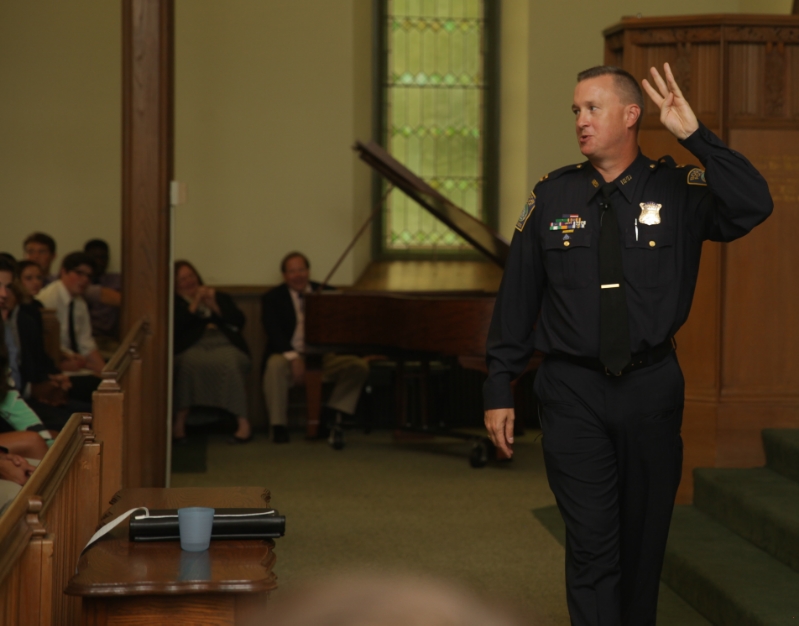 However, even though he didn’t anticipate either, the Academy prepared him for both. Kelley visited classrooms and spoke to the entire Middle School before addressing the faculty and students at school meeting Sept. 11.

“I came back because of the way I was treated here,” Kelley said. “I’m an alum, and I’m also a huge supporter and believer that alumni believe in the Academy, and coming back to the school is part of a way I can help . . . maybe help that kid where I was sitting at school meeting.”

Kelley said WMA gave him the academic structure and skills to be successful, and he values the friendships and mentorships he received. For him, most importantly, he learned the value of being a servant leader.

“The Academy taught me to get outside of my individual self and look out into the world and ask, ‘How can I lead and how can I make this a better place?’” he said.

Kelley, a captain in the Boston Police Department, made Boston a better place in April of 2013. He was working a detail at the Boston Marathon near the finishing line when two bombs exploded. While others were confused, Kelley recognized a certain smell and his experience told him what had happened. The next night, his unit surrounded and captured one of the two suspects.

Similar to 9/11, Kelley said the terrorist attack at the Boston Marathon disrupted reality and “changed every person I know in some way.”

“When we cleared the area after we caught the suspect I called my wife and let her know I was OK. That was tough. It was the only time in operations that both my wife and sister said, ‘Don’t get killed today.’”