LaBrecques honored with dorm
bwells
Oct 22 2014 11:12 AM
The new middle school dormitory was named in honor of Rodney and Shirley LaBrecque. 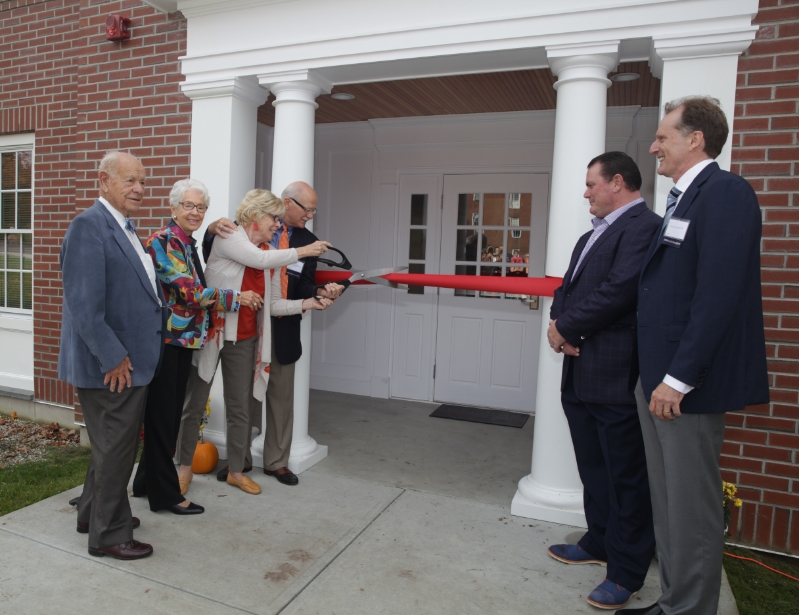 Wilbraham & Monson Academy took the lead in global education when it trademarked itself The Global School®.

This school year, the Academy has again stepped to the front of global education, doing something no other school in the United States can match.

During Family Weekend, WMA had a ribbon-cutting event for the Dedication of The Rodney and Shirley LaBrecque House, which serves as a dorm for 12 Grade 8 middle school students. “We’re the only boarding school that offers boarding for 8-postgraduate,” former Head of School Rodney LaBrecque said.

“This is a different model. I’m pleased with how it came out, and the quality of the students, from what I understand, is great.” Head of School Brian Easler and Board of Trustees Chair Scott Jacobs ’75 offered a welcome to the more than 200 people who attended the ceremony, which was held Oct. 18, in front of the dorm.

Since he began at the Academy in 2002, Mr. LaBrecque felt the Middle School needed a boarding component. In his final year as Head of School, he saw his belief become a reality, with construction beginning near the end of his tenure. Students from China, Korea, Mexico, Russia and Ukraine moved in at the start of the 2014-15 school year.

“What is happening here is to the future well-being of our planet,” Mr. LaBrecque said. “These middle school students are forging a new tradition.”

“The Middle School dorm is another pillar in the career of Rodney and Shirley LaBrecque,” Middle School Director Charlie D’Avanzo said. “Our middle school students will now look beyond their own world to the globe.”

Project donors S. Prestley and Helen Blake, William Faulkner ’57, Edward Gramse ’39 and family, Craig Rubin ’63 and Kent Pecoy were recognized for their generosity during the ceremony.

Also, “There was an anonymous donor who cleaned up a whole lot of extras, I will say,” acknowledged Timm Marini, a member of the Board of Trustees and Chair for the Buildings and Grounds Committee.

Mr. Marini added the project was completed in time for the school year due to the efforts of many people, including former Board of Trustee member Mike Flynn.

“Although it was a hard process and a driven process, it was done with class and poise,” Mr. Marini said. “As a result we have a beautiful facility for the kids.”

Mr. LaBrecque was on campus for the first time in more than a month. He greeted friends, faculty and students as they entered the dormitory for a tour at the conclusion of the ceremony.