Dr. Mark Keroack '72 named as Commencement speaker
bwells
May 5 2015 9:35 AM
Dr. Keroack is the CEO and President of Baystate Health, the largest employer in Western Massachusetts. 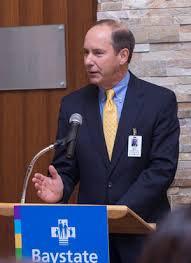 Dr. Mark Keroack ’72 MD, MPH, who saw two of the biggest transitions in the history of Wilbraham & Monson Academy, will be this year’s commencement speaker at the Academy’s graduation ceremonies May 23.

“It means a lot to me to come back,” said Dr. Keroack, who visited with students and administration April 21 during a private luncheon on campus. “I was in the first class of Wilbraham & Monson, and now it’s been 43 years. I’m hoping I’m going to share some of the unexpected twists and turns in my life, and how what I learned here at the Academy helped me prepare and adapt to them.”

Dr. Keroack, a Springfield native, attended the Academy when it went co-ed, and was entering his senior year in 1971 when Wilbraham Academy and Monson Academy merged.

“It’s remarkable to me, all the technical learning I’ve done is less useful to me in this moment than the stuff I learned here,” Dr. Keroack explained. “I got a masters degree in bio statistics: I don’t do statistics anymore; I got an MD from Harvard Medical School: I don’t practice medicine anymore.

“But I have to influence and inspire people every day, and I have to rally people toward a common purpose, and I have to help people see the higher value of what they’re doing. All of those things, I’ve drawn from here, and also Amherst (College). The idea of maintaining balance in your education is one of the things I’m going to try to get across.”

“I’m thrilled to have Dr. Keroack as a commencement speaker because I think he has an extremely interesting and engaging story in the track of his life since he left here in 1972,” Head of School Brian Easler said. “I’m excited for the community to hear his story.

“In addition to that, he’s the President and CEO of the largest employer in Western Massachusetts, and he’s using innovative practices to maintain the independence of Baystate Health. It’s going to be a good message for everyone.”